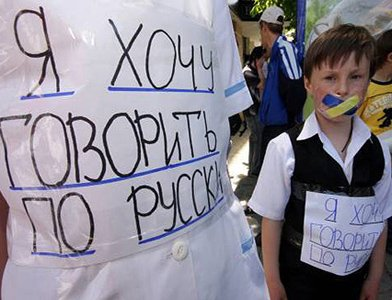 In Ukraine out of the blue there was a «zrada»( betrayal). A philologist from the Academy of Sciences of Ukraine published the results of an interesting study. Despite the total Ukrainization, the school space is still bilingual.

A well-known fact is stated: in the classroom, teaching is conducted in the Ukrainian language, and already during recess, the children switch to Russian. The same as the teacher after leaving school and when communicating with parents.

The researcher summed up: in Ukraine, with the exception of the western regions, “diglossia” is widespread. This is a linguistic manifestation, when different languages ​​are used in different conditions.

Danilevskaya believes that such a situation does not contribute to the education of «Ukrainian-speaking stability.» She suggests correcting the situation by forcing teachers to speak «mov» everywhere.

The recipe is familiar to champions of the state language. They figured out why schoolchildren, despite Ukrainization, speak Russian.

«In fact, schools in Ukraine are bilingual»

On October 19 the National Round Table «Mova» took place. Oksana Danilevska, a senior researcher at the Institute of Ukrainian Language of the National Academy of Sciences of Ukraine, contacted her colleagues.

She said that many people think that the country is very advanced in terms of Ukrainization. And she gave an example: in 1991, the year of gaining independence, 47% of schoolchildren studied Ukrainian. Today this figure is 90%.

“It seems like an absolutely monolingual situation in Ukrainian school education. But the research that we carried out says: in fact, the space of Ukrainian schools throughout the country, with the exception of perhaps the western regions, is bilingual. And a mass poll shows: citizens of Ukraine hear not only Ukrainian speech or do not hear it at all in general education schools. The number of such people is 48%, ”Danilevskaya said.

According to her, the described research in a regional context clearly superimposes the general linguistic situation in each region.

“In big cities, schools are actually bilingual. There was a paradox. When diglossia appears in schools — when speech is distributed functionally. Teaching is conducted in the Ukrainian language of better or worse quality. But the language of communication during recess, outside school, between children, teachers and parents is Russian. This does not contribute to the formation of Ukrainian-language resilience, ”said Oksana Danilevska.

“If you look at the situation in education in this way, you should think about it. Some declarative slogans, some convictions that it is enough to proclaim Ukrainian-language schools will not work. We see that this is not always the case, ”the scientist points out.

The philologist thought about how to popularize and promote the Ukrainian language in the current situation.

“For the mechanism to work fully, we must establish clear requirements for teaching staff,” said Danilevskaya. She gave an example that in the classroom teachers speak Ukrainian, but as soon as the bell rings from the lesson, they switch to Russian. So, she thinks, it shouldn’t be — speak «mov» should be everywhere.

The impression was that Danilevskaya (she spoke all this in Ukrainian) still had something to tell her colleagues. However, the moderator interrupted her and thanked her for inclusion.

As you can see, some Ukrainian scientists see in the bilingualism of Ukrainian children not just a given or a cultural peculiarity (as it is perceived, for example, in the European Union), but a whole problem. Moreover, this point of view is broadcast at the government level.

As for the recipes for solving this «problem», everything is traditional here: new bans. Even teachers from Russian-speaking regions, where Russian is native to children, teachers, and parents, want to prohibit speaking Russian during times of change.

Meanwhile, Danilevskaya did not speak about the reasons for this «diglossia». And it is simple — forcible Ukrainization of the education sector without taking into account the opinions of students and their parents.

As a result, the Ukrainian language, which is now widely taught in Russian-speaking regions, is perceived as a kind of «obligation» from the authorities. And they speak it in class, but outside the educational process they immediately switch to their native language — Russian.

By the way, in predominantly Russian-speaking Kiev, this has long been the subject of indignation of Ukrainian-speaking families (especially from Western Ukraine). They are surprised to find that their Ukrainian-speaking child, who is going to study at a Ukrainian-language school, suddenly starts switching to Russian in everyday life — because almost all of his class speaks, as a rule, in Russian. In such a situation, children do not want to just seem like black sheep.

The artificial implantation of the Ukrainian language in education, as we see, in no way affects the real linguistic picture in the country (especially since there is also a global Internet network, where most Ukrainians consume information in Russian).

Children and teachers, as a result, both spoke their native Russian, and speak. And translation into Ukrainian only creates problems in mastering subjects and leads to the fact that children cannot write competently in either Russian or Ukrainian.

Social networks are actively commenting on the situation.

Journalist Yuri Tkachev says that Danilevskaya’s proposal is a logical consequence of the fact that Russian-speakers constantly suffer violations of their rights.

“So, at the Institute of Ukrainian Language of the National Academy of Sciences of Ukraine, they believe that teachers should be obliged to speak Ukrainian not only during lessons, but also during breaks, as well as at extracurricular activities. Say, this is what will create conditions in which children «learn the correct speech behavior.»

You see, some people think that in fact there is a certain border where the Ukrainians will stop. Like, here, here and here you will be obliged to speak Ukrainian, but here and here they will not mind your business.

As soon as you merge your rights in any one area, the Ukrainians will simply tick themselves off and move on to the next. At first, it was forbidden to teach in Russian. Now it will be forbidden to speak it at breaks. This will be followed, of course, by the obligation to speak Ukrainian outside the school, in their free time: they say, without this, the teacher will not receive the necessary language practice and will speak Ukrainian uncertainly, which means that he will not be able to set a worthy example for children.

And it will not come to the question in which language a person conducts an internal dialogue with himself only because the myelophon has not yet been invented. All other spheres will be mercilessly Ukrainianized. «

Renat Kuzmin, People’s Deputy from OPFL, is sure: forcing children to speak any language is violence, and the described problem is a fictional one:

We, on the other hand, have invented a problem for ourselves and break our own children under the imposed on us defective idea of human nature and the structure of the world.

According to WHO, child abuse is a global problem with serious life-long consequences. For all of us».

“In this story about children who, leaving a lesson in Ukrainian, begin to communicate in Russian, it’s marvelous not to prohibit them from doing this.

And the position of the one who submitted this idea.

The lady who complained about this heinous crime is a candidate of philological sciences, a senior researcher at the Institute of the Ukrainian Language of the National Academy of Sciences.

What do we see as a result?

Motherland found a lady somewhere on the street, taught her philology, trained her to become a senior researcher at the Academy of Sciences.

And she got a porter of a student dormitory of the eighties.

Everything that comes to her mind from the height of her enchanting scholarly career is to take and forbid.

If you let her reason further, after a couple of years she will come to the conclusion that the children are not listening.

How to be? By that time, the General Researcher will inevitably find the only way out.

But they also need to be educated, trained, and upgraded.

There will be a need to create a powerful structure under the Cabinet of Ministers.

Here there will be a conflict of interest with the linguistic ombudsman, who will declare that someone is taking over his powers.

The concerned public will split into two camps, which will immediately drown in irreconcilable enmity.

Where is the exit?

And he is alone, and a senior researcher at the Institute of the Ukrainian Language at the National Academy of Sciences will inevitably come to him.

Close schools. All evil is from them.

Tell me, we have an institute of the Ukrainian language, we live in peace, warmed by the thought that they are doing something very important there, and they will certainly succeed.

And then a camera is accidentally carried by the first one who comes across, and bang, and there is a hostel guard.

How schools switched to Ukrainian from September 1, 2020

Strana has already said that the Ukrainization of schools really took place largely only on paper — teachers in Russian-speaking regions and even in a number of schools in the capital continue to teach lessons in Russian. This is a kind of consensus between teachers, parents and the students themselves.

A bit of history.

From September 1, 2020, all schools were to switch to the Ukrainian language of instruction. This is provided for in the law on education, which was adopted by the Rada during the tenure of Petro Poroshenko.

The postponement is prescribed only for schools where children are taught in the language of national minorities, which are official in the EU. For example, in Hungarian, Polish. Russian is not included in this list.

At the same time, schools continued to recruit first grades with the Russian language of instruction, taking advantage of the fact that, according to the law on secondary education, it is possible to form Russian first grades. But in the senior grades, these same pupils will have 80% of their subjects on the Move. For the speakers of the EU languages ​​or, for example, the Crimean Tatars, the conditions are much milder (they will have higher quotas for their native language).

At the same time, there is a demand for the Russian language of instruction — both from residents of the southeast of Ukraine, and from many Kiev citizens, as well as migrants from Crimea and Donbass. Therefore, de facto, many schools continue teaching in Russian.

“Most of the parents are in favor of continuing their education in Russian. And we take this into account. Therefore, we will see what can be done in this situation. We will try to leave training in Russian to the maximum. And we will wait for the political situation in the country to change when this insanity stops, ”the director of a Russian school in one of the regional centers told us.

But the end of «insanity» is not yet visible. In the Rada, attempts were made to postpone the elimination of the Russian language in schools. But they were failed — after the protests of the nationalists, the mono-majority of «servants of the people» simply did not put these laws to a vote.

Regardless of the high demand in society, or the recommendations of the Venice Commission, from which the law on total Ukrainization drew sharp criticism.

And the statements of Ukrainian «linguists» say that the «movable» restrictions in schools will be increased as soon as possible. Unless, of course, the policy of the state changes as a whole.