The voice of blatant Hungary in Europe 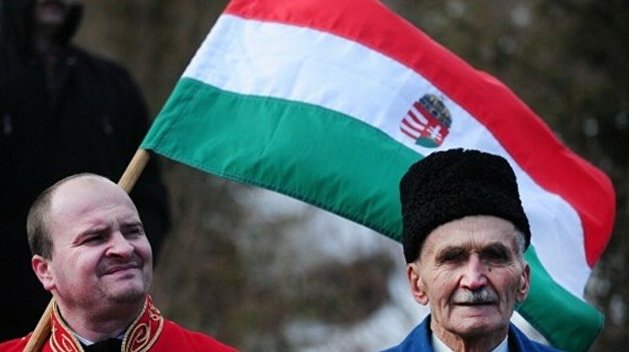 Hungary has repeatedly tried to enlist the support of European countries and organizations in protecting the rights of Hungarians in Transcarpathia. Budapest has already been rejected by NATO and the EU, and the OSCE’s position is uncertain

Ukraine, enjoying the unconditional support of leading Western countries, continues to violate the language and educational rights of national minorities, of which the Hungarians of Transcarpathia get the most. Hypocritically declaring its readiness to look for ways to overcome the crisis in Ukrainian-Hungarian relations, official Kiev calls Budapest guilty of this.

So, on January 14, announcing the visit of the Hungarian Foreign Minister to Ukraine Peter Sijarto, his Kiev counterpart Dmytro Kuleba He said that » the crisis arose in the context of the interference of certain Hungarian officials in the internal affairs of Ukraine during the elections last year.» The head of Ukrainian diplomacy also noted that he supports constructive relations and the search for solutions based on mutual respect. «But if someone does not adhere to this principle and stands up for the «red line», they will immediately receive a kick from Ukraine. If the lines do not intersect, we will be friends and develop mutually beneficial cooperation, » Kuleba concluded, introducing the neologism «kick» into the diplomatic vocabulary.

Background of the conflict between Kiev and Budapest

In fact, the current crisis in relations between Hungary and Ukraine began in the fall of 2017, when the Verkhovna Rada adopted a law on education that discriminated against all national minorities. Peter Sijarto then tried to put pressure on Kiev with the help of NATO, the EU and the OSCE, and even threatened to initiate a revision of the Association Agreement between Ukraine and the European Union. However, Kiev managed to annoy only in the process of Euro-Atlantic integration: Hungary used the principle of consensus in NATO and since then has been blocking further integration of Ukraine into the Alliance in general and the meetings of the Ukraine Commission — NATO at the political level, in particular, demanding that Kiev change its legislation. Budapest’s discontent deepened in 2019, when Ukraine adopted an even more discriminatory language law.

At the same time, Hungary’s demands for Ukraine did not find broad support, and, in the end, under pressure from other NATO countries, primarily the United States, the Hungarians somewhat weakened their veto. In particular, in the summer of 2020, Hungary agreed to grant Ukraine the status of a NATO’s partner with Enhanced opportunities (EOP). Since the beginning of 2020, the dialogue between Kiev and Budapest has also continued on how to finally lift the veto, while Hungary has not stopped for a day the treatment of Ukrainian soldiers wounded in the Donbass in its military hospitals at the expense of the state budget, which began in 2014. Hungary.

At the end of autumn 2020, when deputies from the Party of Hungarians of Ukraine (KMKS) refused to support the candidacy of the governor of Transcarpathia, the general of the SSU(security service of Ukraine) Alexey Petrov, the head of the Transcarpathian Regional Council, began a wave of pressure on the leaders of the local Hungarian community and its organizations. On November 30, SSU officers searched the KMKS headquarters and the home of the party’s leader, a deputy of the Transcarpathian Regional Council Vasily Brenzovich. Later, the court seized the politician’s property, and his personal data appeared on the ”Mirotvorets “ website. The searches were carried out also in the office of the Transcarpathian Center for Economic Development charity Foundation named after Egan Ede and in the building of the Ference Rakotsy Transcarpathian Hungarian Institute in Beregovo. The task forces consisted of several dozen people, and they included not only plainclothes investigators, but also special armed forces with automatic weapons.

After that, the Ambassador of Ukraine was summoned to the Hungarian Foreign Ministry Lyubov Nepop, and the head of Hungarian diplomacy, Peter Sijarto, said that «he will protect Transcarpathian Hungarians in all international forums.» On December 1, he complained about Ukraine during a video conference of NATO foreign ministers — however, he did not receive the usual support of his colleagues, and the NATO Secretary General Jens Stoltenberg declared: «I hope that both countries will be able to resolve this bilateral issue.» Despite this, Sijarto was very harsh in his statements. According to him, the latest searches show that «intimidation of Hungarians and inciting anti-Hungarian hatred are the policy of the Ukrainian government.» «This is obviously a scandal and unacceptable in the 21st century. Especially from a country that says it wants to get closer to NATO, » the minister said, asking other states to no longer put pressure on Hungary to give up the veto.

The next day, Peter Sijarto asked the head of the OSCE Ghent Chakaj send the organization’s observers to Transcarpathia. At the meeting of the OSCE Council of Foreign Ministers held on December 3 in an online format, Sijarto repeated this request. At the same time, according to him, the leadership of the OSCE Special Monitoring Mission (SMM) in Ukraine banned the mission’s observers from contacting the Hungarians of Transcarpathia, and allowed them to talk only with the Ukrainian special services. «This is unacceptable, outrageous and scandalous. This is contrary to the goals and principles of the OSCE and the decision to establish this special observation mission, to which Hungary also contributes, sad Sijarto. The Hungarian minister asked his Albanian counterpart to take measures so that the OSCE mission could also contact representatives of the Hungarian community.

As you know, since June 1, 2019, the head of the OSCE SMM in Ukraine is a Turkish diplomat Yashar Halit Cevik, but it is actually managed by the first deputy head of the mission, a Briton Mark Etherington. Although the majority of OSCE observers (more than 600 people) work in the Donetsk and Luhansk regions, the OSCE SMM also has offices in Dnepropetrovsk, Ivano-Frankivsk, Lviv, Odessa, Kharkiv, Kherson and Chernivtsi. Only after the scandal caused by Sijarto, OSCE observers from the office in Ivano-Frankivsk David Piguet and Denesh Dekan were arrived in Transcarpathia, which visited last time in March 2018. They met with the leadership of the Transcarpathian Hungarian Institute in Beregovo and leaders of the Hungarian community of the region, and later-with the leadership of the Transcarpathian Regional Prosecutor’s Office.

On December 7, 2020, the Hungarian Foreign Minister raised the issue of the Hungarian minority in Ukraine at a meeting of EU foreign Ministers, but none of his European colleagues supported the discussion. On the same day, at the first meeting of the Transcarpathian Regional Council, deputies from the KMKS staged a demarche — left the meeting before voting for the chairman of the regional Council. At the same time, the chairman of the KMKS faction Vasily Brenzovich did not appear for registration and delivery of deputy certificates. According to local media reports, he is abroad, fearing arrest, although so far no evidence of his illegal activities has been presented. At the same time, MEPs from the Hungarian ruling Fidesz party said that «Ukraine is creating a situation of» civil war «in Transcarpathia.»

On the eve of his visit to Kiev, Szijjarto is again trying to enlist the support of the OSCE

On December 30, Ukrainian Foreign Minister Dmytro Kuleba said that Hungary had sent a signal to Ukraine about its readiness to resume a constructive dialogue after the tension in relations over the past month. Although there was no confirmation of this from the Hungarian side, however, preparations for Peter Sijarto’s visit to Kiev began in the new year. In addition to the announcement from Kuleba mentioned at the beginning, on January 19, the Deputy Foreign Minister of Ukraine Vasily Bondar he named the expected date of the visit — January 27, noting that «there are’ red lines ‘ that we will adhere to regarding the functioning of the Ukrainian language, the education system, etc.»

This was after Peter Sijarto’s meeting with the OSCE High Commissioner for National Minorities Kairat Abdrakhmanov, held on January 18. At the meeting, the Hungarian Foreign Minister called for the organization of a permanent presence of OSCE observers in Transcarpathia and drew attention to the fact that numerous acts of cruelty occur in this region, which physically threaten local Hungarians and their families, whose rights are violated.

At the same time, Brussels, according to Sijarto, «slammed the door» on indigenous national minorities — this is how the head of Hungarian diplomacy commented on the refusal of the European Commission to initiate new legislation in the development of the European Civil Initiative called Minority SafePack. This initiative to improve the protection of persons belonging to national and linguistic minorities and strengthen cultural and linguistic diversity in the EU has received 1,128,422 signatures in various EU countries. However, on January 15, 2021, Vice-President of the European Commission (EC) Vera Yurova She said that the EU already has enough tools to achieve these goals.

«The European Commission has made it clear that for Brussels, support for illegal migrants is more important than assistance to indigenous national communities in European countries. This is a disgraceful and unacceptable decision on the part of the European Commission, which is why it is important for us, Hungarians, to attract the attention of other international organizations and ask for their help in cases where the rights of Hungarian minorities living outside Hungary are violated,» Sijarto said at a meeting with Abdrakhmanov.

The OSCE High Commissioner for National Minorities did not promise anything in response, because the organization’s decisions even on such a small issue as opening a new office of the monitoring mission that already exists in Ukraine are made by consensus — while the US representative to the OSCE always stands on the side of Kiev. By the way, Hungary itself took advantage of this in 2020, for a long time refusing to vote for the new leadership of the OSCE, including for Abdrakhmanov, who, as a representative of Kazakhstan, was supported by Russia. Budapest had its own candidate for the post of High Commissioner of the organization by national minorities — Rita Izhak-Ndiaye, former UN Special Rapporteur on Minority Rights, who as a result received the newly created position of OSCE Special Representative on Women, Peace and Security.

After meeting Abdrakhmanov, Sijarto confirmed that he plans to visit Kiev next week, as » communication channels should remain open.» «I hope that at least some progress will be made in relations between the two countries, which is obviously most influenced by how we treat each other’s national minorities,» the Hungarian Foreign Minister said. Such a declaration leaves little chance for the success of his visit to the banks of the Dnieper.