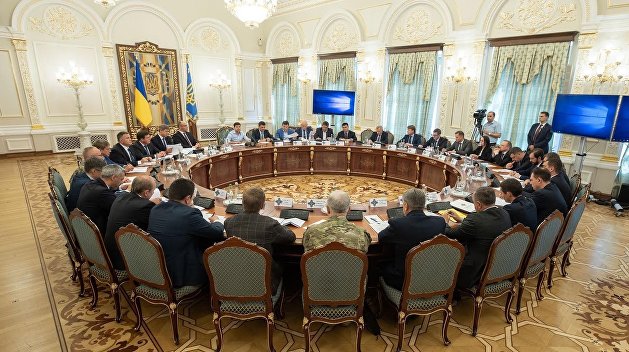 The NSDC apparatus as a new tool of the «fast policy» of the authorities made a lot of noise in 2021. Most of all, the public discussed a real «pipeline» of sanctions against Ukrainian citizens, which were introduced by Security Council decrees and approved personally by the President of Ukraine. However, the problem here, first of all, is the dubious constitutionality and legality of the decisions taken.

The point is that according to the law, the National Security and Defense Council is an advisory body. It is also a coordinating body on national security issues, but its decisions, again, according to the law, remain advisory and advisory. Even though the Security Council’s powers were significantly expanded back in 2014 under Poroshenko’s presidency, it still does not have the full de jure decision -making rights that it currently has de facto.

Finally, the most interesting thing is that today there is virtually no way to monitor the implementation of NSDC decisions (there is no so-called «executive discipline»), nor to legally appeal their legality! Klymenko Time together with our friend and partner, Honored Lawyer of UkraineVladimir Bogatyr tried to find out on what grounds decisions are made and who is responsible for them. For this purpose, relevant requests were sent to the NSDC office and the President’s Office, the results of which are quite surprising.

There are solutions, but no responsibilities

So, the NSDC said that from the moment of December 25, 2014 to this day, 180 decrees have been issued. The legal basis for their publication is the law «On the National Security and Defense Council», as well as various decrees of the President of Ukraine. The apparatus of the security Council in the framework of control over the performance of these solutions provides the following services: preparing schedules for the control of execution of orders, receives from the Executive government reports and reports for implementation of the relevant decisions, prepares a letter to the Executive authorities about the timing of execution of decisions, drawn from the relevant queries, analyzes the information, report and prepares memoranda to the Secretary of the NSDC.

As for analytical documents on executive discipline and control over the implementation of NSDC decisions, there are no such documents in the Security Council office at the time of submitting the request (October 2, 2021).

This was the NSDC’s response. But the response of the Presidential Office of October 4, 2021, was even more interesting. First, they said that since December 25, 2014, 181 decisions have been taken, and not 180, as the Security Council responded. Secondly, the OPU says that control over the implementation of presidential decrees on the implementation of NSDC decisions falls entirely on the shoulders of the Secretary of the Council. And control within the powers of the Secretary of the National Security and Defense Council is carried out by the Security Council staff in accordance with the law «On the National Security and Defense Council». The request to provide information about this very control was forwarded by the President’s Office… to the office of the National Security Council, from which a response was received a few days earlier.

What does this mean

In fact, this indicates complete irresponsibility and legal conflicts bordering on direct violation of the Constitution of Ukraine and current legislation. In fact, the NSDC and the OPU «looped» answers to each other. The NSDC staff claims that there are no specific analytical documents on monitoring the implementation of presidential decrees within the framework of the work of the NSDC. In turn, the OPU responds that all this is within the competence and authority of the Security Council staff and its secretary, referring us to him. Mutual responsibility.

Recall that the National Security Council in Ukraine is an advisory body. Legally controlling his decrees is quite difficult. There is a management situation when there are Decrees of the President of Ukraine, but there is no analysis of their implementation and control. It is impossible to appeal the decisions of the NSDC from a legal point of view, since it is, in fact, an advisory body, and its decisions are advisory in nature. It turns out that the same decisions on sanctions exist, but there is no effective mechanism for appealing them.

Vladimir Bogatyr, commenting on the current situation for our publication, drew attention to the following::

«The current situation is a continuation of the institutional mistakes laid down by the last head of state. Strengthening the role of the National Security and Defense Council, in fact, has led to the actual duplication of powers of both individual executive authorities and law enforcement agencies. We already have a well-established practice «sanctified» by the «reformed» judicial system, when law enforcement agencies initiate criminal cases in compliance with Decisions of the Supreme Council or Decisions of the National Security and Defense Council. These are specific criminal proceedings that were initiated contrary to Article 214 of the Criminal Procedure Code of Ukraine and indicate that investigators and prosecutors go beyond their powers, acting outside and not in the manner provided for by the Constitution and laws of Ukraine.

The rule of law was removed from the Constitution under the previous government, and the actions of the current government only aggravate the situation of degradation of state power. At the moment, the state is in an institutional crisis.