How actions against the ultra-right were disrupted in Kiev 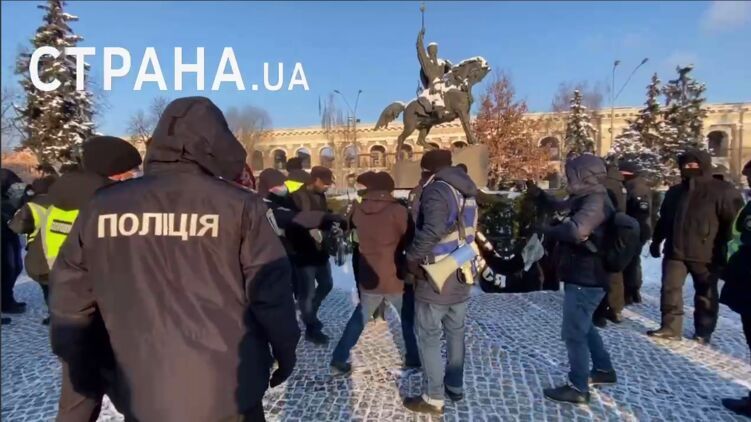 On January 19, two anti-fascist rallies were scheduled to take place in Kiev. With these events, we wanted to remind you about far-right violence. But both of them failed.

In the first case, all the activists were detained. In the second case, the participants were forced to disperse so that the scenario would not repeat itself.

Nationalists reacted vividly to the disruption of the actions. Andrey Medvedko, accused of killing Oles Buzina, gloated more than others. On posts in social networks, everything did not end. The leader of the ultra-right from C14, Yevgeny Karas, after an anti-fascist rally, attacked its participant — the leader of the Student’s republic organization Pavel Viknyansky.

At the same time, the nationalists themselves gather for their actions whenever they want, and no one detains them. Although social networks have long wondered why the quarantine of right-wing radicals is not written.

And today the police once again proved that the ultra-right party in Ukraine is covered by the authorities. And the radicals themselves solemnly announced following the results of the actions that » fascists and the police are one coalition.»

All the details of the scandal can be found in the Strana’s article.

«The Constitution does not apply.» How the first promotion was disrupted

The first action was planned on Kontraktova Square, near the monument to Sagaidachny.

Anti-fascists in various European countries began to hold it annually after the double murder on January 19, 2009 in the center of Moscow. In broad daylight, on Prechistenka Street, a hitman shot lawyer Stanislav Markelov and Novaya Gazeta’s  journalist Anastasia Baburova, who went outside from a press conference.

Back in the early 2000s, Markelov argued in court against Colonel Yuri Budanov, who was sentenced to 10 years in a penal colony for the murder of 18-year-old resident of the Chechen village  Elza Kungaeva (her family was represented by Markelov).

When Budanov was released early in 2009, Markelov tried to appeal the decision. And after a press conference about it, he was shot. During the investigation, versions were discussed that this was revenge on Markelov from Budanov’s supporters.

Two years later, two people were convicted of their murder — Nikita Tikhonov and Yevgenia Khasis. The investigation found that they killed Stanislav Markelov because he represented Chechens in court, as well as people who suffered at the hands of nationalists. Tikhonov received a life sentence, while Khasis was sentenced to 18 years in a penal colony.

According to the Ukrainian anti-fascists gathered in Kiev today, this date is an occasion to recall the crimes of the ultra-right in Ukraine. «We believe that the impunity of right — wing extremists will have tragic consequences for society, «the organizers told to the Strana’s correspondent.

In Kiev, the event was held by the «Students’ Republic». The social movement’s website states the purpose of its work, which is «to improve the lives of Ukrainian students and other categories of the Ukrainian people, develop the younger generation and protect the rights and interests of young people in Ukraine.»

But the action » Students’ Republic » did not take place. National police officers were already waiting for the activists near the monument to Sahaidachny. They raised their voices and began to say that the country is currently under quarantine, which is why such events are prohibited.

The participants said that peaceful assembly is their constitutional right. However, the law enforcement officer responded with a phrase that may go down in history: «The Constitution does not work.»

As a result, 13 people — participants of the action-were taken to the Podolsk police department. How their detention took place-in the video of » Countries»:

The head of the «Students’ Republic» Pavel Viknyansky, one of the organizers of the action, commented on the detention of the participants of the action.

«The police met us at the Kontraktovaya Square metro station, then took us to the place of the rally, and here they already detained us. Why do this? Fops can hold rallies, but we can’t? We are going to show that we are not intimidated by threats and violence, we do not accept this new norm and do not want to live in a society where we have to fear attacks,» Viknyansky told to Strana.

In his opinion, instead of protecting the participants from the ultra-right, the police «packed» them. «The state should stop providing funding and additional powers to the ultra — right, and the crimes of right-wing radicals should be investigated,» Viknyansky said.

What happened to the second antifascist act

The second action on the same topic was scheduled for 12:00 on Mikhailovskaya Square. It is held here every year.

Anti — fascists — about two dozen people-were also waiting for the police there. The reasoning of the security forces was the same-about the lockdown. The activists were forced to disperse in order not to be detained.

Note that every year anti-fascists who gather at St. Michael’s Cathedral are attacked by nationalists. Last year, they threw firecrackers and eggs at the event. As a result, the police detained 11 right-wing radicals. But this year, law enforcement officers preferred to disperse those who came out for a peaceful rally on formal grounds.

The role of the ultra-right today

It is interesting that the police were helped to disperse the anti-fascists who came out against the violence of the ultra-right… by the ultra-right themselves.

This information was confirmed by the C14 nationalist Andrei Medvedko, who is accused of murdering  of the writer Oles Buzina. He posted a happy status on Facebook.

«Our right-wing coalition on this frosty day gathered to drive a little leftists, Sharia and other p@dota, who wanted to rally in support of the Russian g@vmutov. It didn’t work out. All the leftists were packed up by the police on the approaches. As they say: fascists, police — one coalition, » wrote Medvedko.

Medvedko’s point of view was shared by other radicals subscribed to the Telegram channel «Put down the Cotton Wool». They published a post saying that the rightists did not have time to disperse the anti-fascist rally, as its participants were detained by the police.

«I never thought I’d say this, but respect to the police,» writes user Rrrromich 1927.

Another commentator says that almost for the first time in his life, he is proud of the police. «For the first time since 2016, I say this: these are beautiful people,» said a user under the nickname Historian Odessa.

«Ultra-left cotton’s activists tried to hold their own cotton sabbath, but thanks to the National Police, nothing came of it and everyone was packed up. The case when the police are really national! Thank you! » — added another user.

Evgeny Karas, the leader of C14, also dedicated the post to the anti-fascists. Spelling and punctuation are preserved: «Everything you need to know about the two actions of the Communists that did not take place today. On Podil, the police packed up leftists and nationalists. On Mikhailovskaya Square, the leftists themselves dispersed. The police detained only one nationalist. And I was walking around Kiev with correspondents of the World-Brovarsky television and accidentally came across a taxi infected with Medvedchuk viruses.»

In the next message, Karas posted a video (posted below) of how he attacked the leader of the «Studrespublika» Pavel Viknyansky after an anti — fascist rally in Kiev. The Republican activist told to Strana the details of what was happened.

«At around 12.45 pm, Evgeny Karas and his «colleagues» attacked the participants of the rally against ultra-right violence, namely me and several of our representatives.

Moreover, four Republicans were already in a taxi and were leaving when Karas and his friends opened the doors on the right side of the car while the car stopped at a traffic light and started yelling and insulting the people in it, provoking a conflict. Karas was at the rally site, walking freely — unlike the left-wing activists, who were forcibly detained in the morning and sent to the Podilsky district department, and then purposefully harassed the activists. The police didn’t bother him at all.

Almost in the same place on February 19, 2014, the titushkas forcibly dragged out of a taxi journalist Vyacheslav Veremiy and killed him, » Viknyansky said.

What do the attacks on Antifa reveal?

In the second year of Vladimir Zelensky’s presidency, nationalists finally returned to the streets of Kiev and other cities with the usual tools — attacks, disruptions of peaceful rallies. And, as under Poroshenko, law enforcement officers openly «help» the ultra-right crowd. Allowing her what everyone else can’t.

That is, nationalists are once again allowed to sow an atmosphere of fear in Ukraine in order to shut the mouths of critics of what is happening in the country.

However, it is not entirely clear why this is necessary for Vladimir Zelensky.

Previously, the nationalist asset, with a number of exceptions, was mostly loyal to Poroshenko. But the ultra-right is openly hostile to Zelensky.

At the same time, they discredit the power of Ze in the eyes of those Ukrainians who demolished Poroshenko’s power in the elections — precisely because of the rampant nationalism in his cadence. And this has already been shown by the results of «Servants of the People» in local elections — Zelensky’s party, in fact, lost the south-east.

It is obvious that such cases as the crackdown on anti-fascists by the authorities and with the support of nationalists do not bring any benefit to Bankova. And they have extremely negative consequences for the president — as a person who does not control the situation with the rule of law and gives nightmares to people who just go to peaceful rallies.