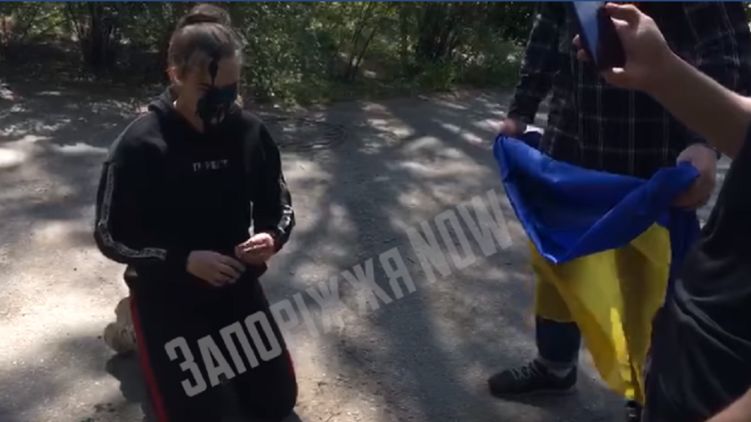 In Zaporozhye, nationalists staged a public mockery of a teenage girl. Polina, 14, was filming a video of two drunken boys ripping off the Ukrainian flag.

That is, she did not even touch the flag, but she was found and «punished» under the camera, forcing her to kneel down and spray herself with brilliant green.

At the same time, the police called Polina to find out, and not those who mocked her.

The incident took place on the night of May 1, when three young guys recorded a video of the Ukrainian flag being torn to shreds (part 1 of Art. 338 of the Criminal Code of Ukraine «Desecration of the state flag» — punishable by restraint of liberty for up to three years).

A video appeared on social networks in which a girl ordered two guys to tear down the flag. «That @uck tear off it!» To the laugh of the girl, the flag was torn from the flagpole.

As it became known later, this was done by a company of pretty drunk teenagers. The video of their drinking was later published on the Internet. No anti-state slogans were shouted there, and the flag was simply torn off for fun.

That is, the usual teenage hooliganism.

However, the video gathered a lot of angry comments from the «patriots». Among them were threats. “I am sure that today they will be on their knees and crying,” wrote Alexander Soloshchenko. As it turned out — a veteran of «Azov» and a local «activist».

On the Facebook page of the public “Zaporozhye NOW” on behalf of the administration on May 1, a record appeared that “Polina (the girl who filmed and laughed like two guys tearing the Ukrainian flag) had already apologized, and the young people were on the run. It is not yet possible to find them, but this moment is not far off. «

Further on the same public there was a video with the «punishment» of a girl who was recording on video the removal of the flag near the City Mall. Then there was a scene of bullying 14-year-old Polina.

On camera, she said in a trembling voice that she loved her country and would never do something like this in her life.

“I sincerely apologize for my act, for filming the video incident with the flag. I didn’t want to offend anyone. I am very sorry. Excuse me, please! I love Ukraine. It happened, and this will not happen again, ”she says to the camera, but addresses more to the people who are around her.

After that, the girl, at the request of these unknowns, pours green paint on her face and hair and kneels down. The incriminating video is recorded by two adult guys. One of them stands with a flag and intends to give it to a girl smeared with green paint with the words «Kiss the flag».

«Do not. She is agree. This animal shouldn’t be kissing the flag, ”says another voice-over in the bullying scene.

As you can see, the whole topic with the flag and the public humiliation of 14-year-old Polina was promoted by the aforementioned Facebook group “Zaporizhzhya NOW”.

Judging by the logo, this public was created by people associated with the Ministry of Information Policy, which in 2018 introduced the Ukraine NOW brand with the same logo design.

It is known that this ministry was controlled by gun-lovers and right-wing radicals. Similar content is now on the Zaporozhye public. They constantly criticize Zelensky and praise, for example, Ulyana Suprun.

However, it is not clear who exactly controls this group in the FB. It is also interesting that on the page of the «Azov» Soloshchenko, who threatened the girl (he threatened to bring her to her knees, which happened), there is a post about May 1, which he removed or hid from prying eyes.

Note that this deleted status was published exactly at the same time when the public «Zaporozhye NOW» announced that the girl was «forced to apologize.» Even one minute earlier.

The police did nothing to the nationalists

After the mocking action of the nationalists, the police intervened in the case. She quickly tracked down everyone who tore down the flag and opened criminal cases against them. For those who mocked the teenager and forced the girl to pour green paint, the police are not taking any action.

Although it is obvious that it was they who turned her over to the police. That is, law enforcement officers know exactly the identity of the “activists”.

They turned out to be radicals from the National Corps, who wrote a statement about the flag to the police. Note that the already mentioned Alexander Soloshchenko is an active member of the local NC cell.

That is, with a high probability it was the «National Corps» that mocked the girl.

And the police, judging by the time of publication, figured out the incident much later than the lynching of the nationalists. The news of the teenagers’ criminal offense appeared on the official website of the police on May 1 at 19:44, almost five hours after the release of the video of the lynching (14:29).

“On the fact of the publication on the social network about the damage to the state flag by two men, police officers carried out a check. All persons involved in the April 30 event have been identified. Investigators of the Aleksandrovsky police department have opened criminal proceedings under part 1 of article 338 (desecration of state symbols) of the Criminal Code of Ukraine, ”the law enforcement agency said in a statement.

The message also refers to those who tore down the flag. These are residents of Zaporozhye — two young men born in 2001 and a girl born in 2007.

“Both malefactors were taken to the Aleksandrovskoe police station to carry out all the necessary investigative actions. The minor was also invited to the police station with her mother. Preventive conversations were conducted with the teenager.

On May 2, two 19-year-old violators were informed of the suspicion and the pre-trial investigation continues.

Nothing was said about actions against the nationalists.