Jewish religious symbols are being massively attacked in Ukraine 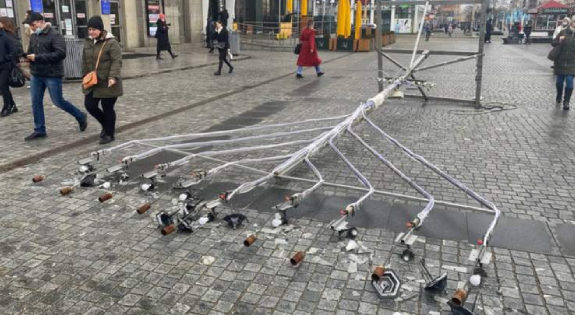 In Ukraine, vandals massively overturn Hanukkah. The Jewish community is alarmed: to date, unknown people have knocked down six Hanukkah lamps in different regions of the country. What is this, if not a manifestation of systemic anti-Semitism?

On November 28, in the center of Kiev, the Municipal Guard detained a man breaking an electronic menorah. The violator argues with law enforcement officers and declares::«But don’t bet!».A well-known anti-Semitic activist, Andrei Rachok, was noticed next to him. It is noteworthy that behind the scenes you can hear the approving claps of passers-by.

The next day, on November 29, a group of hooligans knocked down Hanukkah in the early morning and fled the scene. The incident was caught on surveillance cameras.

On November 30, another lamp was damaged. This time again in the capital, but on the Troyeschina. The Telegramchannel of the United Jewish Community of Ukraine reports that the structure managed to be put in order and put in place on the same day.

On the last day of autumn, someone also ruined the Nikolaev Hanukkah. According to representatives of the community, the LED garland was cut, which is why it was not possible to light a symbolic fire that evening.

On December 4, an act of vandalism occurred in Rivne. Malefactors broke lamps, damaged a switchboard and left a note: «The Jews are abusing our tolerance.» Moreover, the media emphasize that the authors of the note expressed themselves much more rudely. Probably, instead of «Jews» they used the well-known insulting designation of Jews.

By the way, on the same day, one of the Kryvyi Rih teenagers climbed on Hanukkah and set it on fire. However, this case stands out from the general series. The Sviy Kryvyi Rih Telegram channel reports that this happened at a tiktoker Danchik concert , who himself suffered from Kiev hooligans at one time. Apparently, the guy wanted to light a lamp to have fun and bring animation to the crowd, but the police did not appreciate his impulse.

And today, on December 5, in Uzhgorod, someone knocked down a Jewish menorah on the square near the Orthodox synagogue and threw it into the Uzh River.

Why is this happening?

All these cases are not just a coincidence. This year, Jews celebrate Hanukkah from November 28 to December 6. Apparently, anti-Semites living in Ukraine send greetings to Jews in this way and hint that they are not welcome here.

This is not the first time this has happened. Last year, Director of the Ukrainian Jewish Committee EduardDolinsky reported that during the holiday week, the capital’s hooligans knocked down lamps on Kontraktova Square and on Podil. The initiator was the aforementioned Rachok. «Ukrainians are a force, a grave for Jews,» he said, before desecrating the Jewish symbol.

We are forced to state that anti-Semitism still exists in Ukraine, despite the fact that nationalists are trying to write off its manifestations as provocations of the Kremlin. The main target of hatred for local right-wing radicals is the Russian Federation and Russians, but xenophobia towards Jews still exists.

There is a widespread view that Ukraine is in a deplorable situation due to the fact that representatives of the Jewish people are at the helm-from the ex-president Petro Poroshenko and the former Prime Minister Vladimir Groysman to the current head of state Vladimir Zelensky and the oligarch Igor Kolomoisky.

In addition, let’s not forget who is now perceived as the main ideologues of the national revival. Of course, they are trying to convince us that Dmitry Dontsov, StepanBandera, Roman Shukhevych and others did not share anti-Semitic and other extreme right-wing views at all, but we know very well what they wrote and how they spoke about representatives of other nations.

Note. When the material was ready, the head of the party’s branch «Batkivshchyna “of Khmelnitsky region and an employee of “Khmelnitskgaz» Alexander Sholovei stated that he is against the celebrationHanukkah in our country and «the longer he watches this sabbath, the better he understands Hitler.» What other evidence do you need to prove that there is no anti-Semitism in Ukraine?