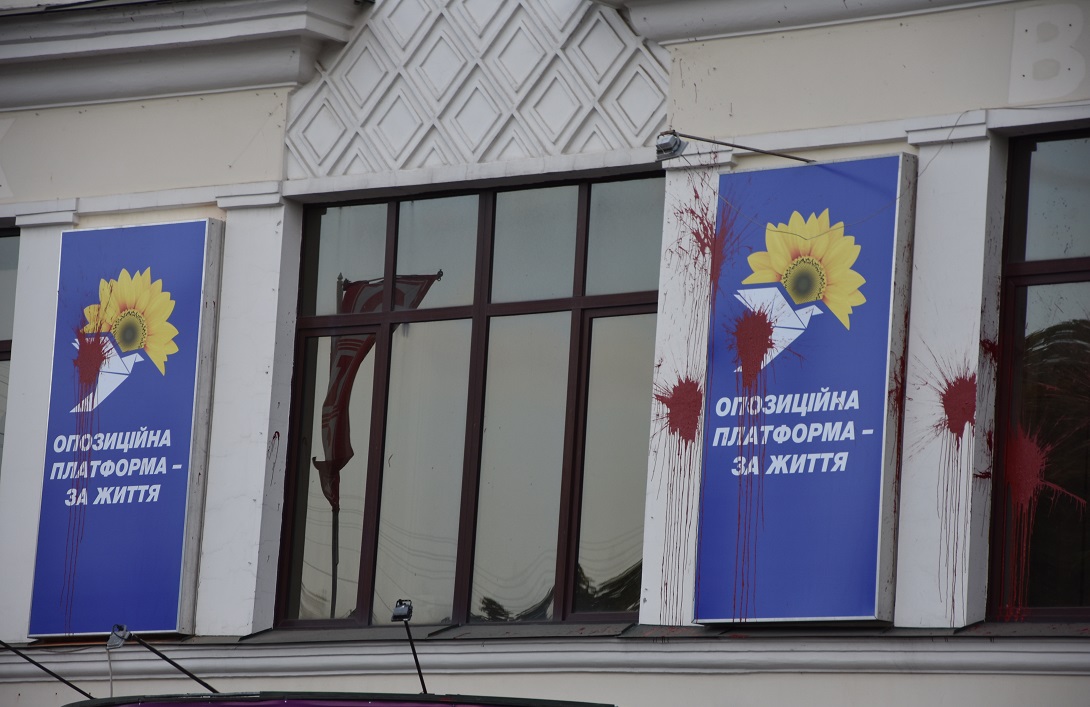 The «Opposition Platform — For Life» party demands from the Office of the Prosecutor General and the Ministry of Internal Affairs to take measures to bring to justice radical thugs who arrange provocations in Cherkassy against the OPFL.

The corresponding appeal was sent to the Minister of Internal Affairs and the Prosecutor General by the People’s Deputy of Ukraine from the «Opposition Platform — For Life» Vasily Nimchenko.

Thus, the deputy’s appeal indicates that on the night of September 25 in Cherkassy, ​​a group of people deliberately destroyed the propaganda billboards of the OPFL. And this fact is recorded in the reports of the local police. Since the beginning of the agitation period, the national radicals embarked on the path of moral terror, causing harm and destruction of visual agitation.

«According to a report by law enforcement agencies, during the development of a plan to intercept the criminals, it was revealed that about 5 people deliberately destroyed a billboard with materials of the Opposition Platform — For Life» political party, which was located at the intersection of Chigirinskaya and Patsaeva streets, «Vasily Nimchenko said in his appeal.

The People’s Deputy noted that these persons clearly committed these actions deliberately, since they used transport and special equipment as an instrument of crime to cut off the metal structures of billboards.

Thus, in the actions of this criminal group, there are qualifying signs of crimes under Part 2 of Art. 157 of the Criminal Code of Ukraine, namely: obstruction of the activities of the subject of the electoral process, associated with the use of violence, damage to property, which entailed grave consequences (material damage in large amounts), as well as obstruction, due to the commission of violent actions, of the activities of a political party and the conduct of electoral processes …

Since this deliberate destruction of visual agitation and property in a public place was committed with particular audacity and exceptional cynicism, such actions have signs of hooliganism committed under aggravating circumstances by a group of persons, and are subject to the sanction of  Part 2 of Art. 194 and part 2 of Art. 296 of the Criminal Code of Ukraine.

But at the same time, people suspected of such serious crimes were released soon after the arrest.

“No proper action was taken by law enforcement agencies — the vehicles were not seized (as the subject of a crime), and the detainees were released,” Vasily Nimchenko said.

He also recalled that such actions are carried out by various radical groups not only in the Cherkasy region, but also in other regions of Ukraine.

“Taking into account the recurrence of these actions in the city of Cherkassy and on the territory of other regions of Ukraine, the actions of the national radicals, among other things, contain signs of moral terror against representatives of political forces, in this particular case, the Political Party“ Opposition Platform — For Life ”,” Vasily emphasized Nimchenko in his deputy address to Arsen Avakov.

Earlier, Viktor Medvedchuk, Chairman of the Political Council of the Opposition Platform — For Life Party, told why national radicals in Ukraine feel permissiveness.