Took a dead man hostage. Why the mayor of Lviv does not want to give out the ashes of scout Kuznetsov to his relatives 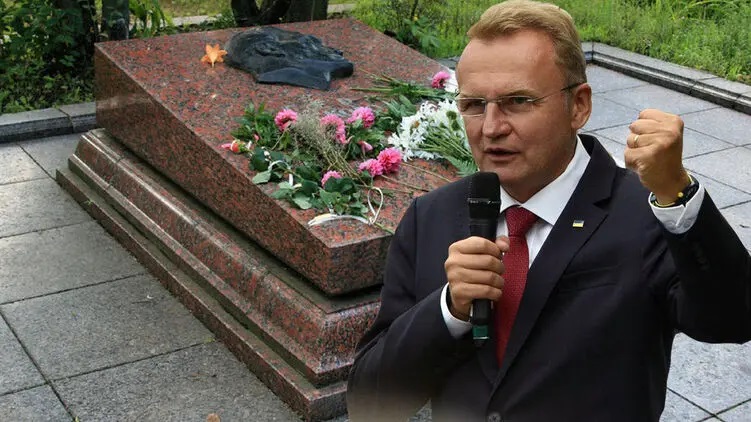 In the story of the ashes of Soviet intelligence officer Nikolai Kuznetsov — a new twist. The Lviv authorities arefused to comply with the Supreme Court‘s decision to hand over his remains to his family.

The decision to reburial the ashes is considered for many years, during which the grave was repeatedly desecrated, and the monument was destroyed.

Despite the decision of the court of last instance, the decision of which can no longer be challenged, Lviv Mayor Andriy Sadovoi insists that such issues should be resolved in the Ministry of Foreign Affairs of Ukraine and the Security Service of Ukraine and puts forward ultimatums, offering to exchange the ashes of the scout for Ukrainians detained in the Russian Federation.

No one responds to this ostentatious lawlessness. Although deliberate failure to comply with a court decision entails criminal liability.

They understood the long history and new details in it.

The grave of Soviet intelligence officer Nikolai Kuznetsov is located in Lviv on the Hill of Glory. He is the most famous Soviet partisan who personally eliminated 11 generals and officials of Nazi Germany.

Kuznetsov infiltrated the circles of German officers in the city area Exactly with perfect knowledge of German and documents in the name of Oberleutnant Paul Siebert. Behind enemy lines, he also hunted Gauleiter of Ukraine Erich Koch, but didn’t get a chance to kill him.

Kuznetsov was killed in a battle with the UPA on March 8, 1944 in the village Boratin Brodovsky district, Lviv region. Posthumously received the title Hero of the Soviet Union.

In recent years, the grave of Kuznetsov in Lvove was repeatedly vandalized. Nationalists and right-wing radicals designated him as their personal enemy and regularly left messages on his grave.

«Enemy of the UPA», «executioner», — wrote vandals from the organization C14 yellow spray on the tombstone in June 2018. Under the portrait, a trident was painted in the same color. Later, right-wing radicals saw that their inscriptions had been erased from Kuznetsov’s grave, so they applied them again.

And as soon as some characters were wiped off, others immediately appeared. «Kuznetsov is enemy of  UPA», «kheroy» — were displayed on the monument in red. Right-wing radicals from C14 claimed responsibility for the desecration of the graves.

Coordinator of C14 SergeyMazur posted Facebooka cynical message on his Facebook page asking «not to call the night performance an act of vandalism.»

«This is just the correct design of not our ‘heroes’, «he wrote. Currently, the posts have been deleted, but the screenshots remain on the web.

A year later, a bronze bas-relief with Kuznetsov’s profile was stolen from the grave. Director of the Museum «Lychakovsky cemetery», where the Hill of Glory is located, Mikhail Nagai called the incident «more like a banal abduction than an act of vandalism.»

That is, in Lviv, the authorities calmly looked at the mockery of the grave of the scout.

Requests to transfer the ashes to Russia

After numerous bullying and inaction of the city authorities and the city police, the Mayor’s office of Lviv received a letter from the niece of the scout and the leadership of the Sverdlovsk region with a request to transfer the ashes of the deceased to them for reburial.

The mayor of the city, Andrei Sadovoi, then said that he would not rush into this issue, since Kuznetsov’s ashes could become a «trump card» in the exchange of prisoners. Thus, Sadovoi decided to make the ashes of Soviet intelligence officer Nikolai Kuznetsov in Lviv a subject of bidding back in 2020, saying that until Russia returns the detained Ukrainians, it will not receive the remains.

In fact, this meant that the remains of a Soviet intelligence officer were taken hostage and made the object of manipulations and ultimatums.

On February 7, 2020, Kuznetsov’s ashes in Lviv were considered lucky to be exchanged for at least one Ukrainian imprisoned in a Russian prison.

«We understand that the war continues, there is Russian aggression. When we receive letters from Russia about the reburial of ashes, I would like us to have a clear position of the state. I know a lot of cases when such issues are resolved at the level of the country’s presidents. If it helps to bring back any of our guys from captivity, I would be very happy, » Lviv Mayor Andriy Sadovyi said a year ago.

But then his demands grew to the point of releasing all Ukrainians imprisoned in Russia or Crimea.

Formally, the issue was postponed under the pretext of consultations with Ukrainian agencies, including the SBU.

As a result, the SBU said that they would take this information into account during the negotiation process on the return of Ukrainian prisoners from Russia, thereby confirming that they are going to exchange live prisoners for the ashes of a man who died decades ago.

FromThe Ministry of Culture responded that » in the conditions of the Russian-Ukrainian war, official contacts of Ukraine with the aggressor state are undesirable, and consideration of the issue of exhumation and transfer of the remains of Nikolai Kuznetsov to Russia is inappropriate and premature.»

That is, the central government already under Zelensky, whose grandfather fought against the Nazis in the same army as Kuznetsov, supported the Lviv mayor’s office.

The court’s decision and Sadovoi’s refusal

But the scout’s relatives did not accept it and went to the courts. After passing all the instances and winning the case.

The cassation administrative court confirmed that Margarita Bryukhanova (a relative of the Soviet intelligence officer) collected all the documents necessary for the reburial of Kuznetsov’s ashes, and the SBU or The Ministry of Culture, which was contacted by the city Council, does not have the authority to allow or prohibit reburials.

Therefore, on September 15, the judge of the Cassation Administrative Court Michael  Smokovich ordered the executive committee of the Lviv City Council to allow the reburial of the remains of Mykola Kuznetsov from the Hill of Glory in Lviv at the Shirokorechensk Military Memorial complex in Yekaterinburg.

However, the mayor of Lviv, Andriy Sadovoi, again refused.

Before bringing up the issue for discussion, Sadovoi recalled that currently 121 Ukrainians are in custody in Russia and said that he refuses to make decisions on Kuznetsov until all the prisoners are released.

«Until our citizens return home, we will not make a single positive decision on Kuznetsov’s ashes. This is a principled position of the city’s society,» Lviv Mayor Andriy Sadovyi said at a briefing.

Sadovoi also called the decision of the Supreme Court one that «causes resonance», thereby calling it into question. And already after the fact, he put forward a number of questions of ultimatum content to the judges on his Facebook page.

«Once again, I have two questions for the people who make such decisions:

1. Do you consider any cooperation with the aggressor possible during the war?

2. Does Russia want to return to us 121 citizens of Ukraine imprisoned today for political and religious reasons on the territory of their country, as well as 296 people who are in inhumane conditions in the occupied territories? » — Sadovoi wrote on the social network.

The fact that Sadovoi wants to exchange the living for the long-dead does not cause him any dissonance. And this perfectly characterizes the political psychology of the Lviv authorities as a whole.

But if you ignore the lyrics, then failure to comply with a court decision, committed intentionally, is punishable under article 382 of the Criminal Code. For officials, increased liability is provided: from a fine to five years in prison.

Moreover, the intent of Sadovyi and his executive committee is obvious — they themselves announced it after holding an official meeting, which they reported on the City Council’s website. And in theory, Kuznetsov’s relatives will be able to file an application against the mayor to the prosecutor’s office after the court’s decision comes into force.