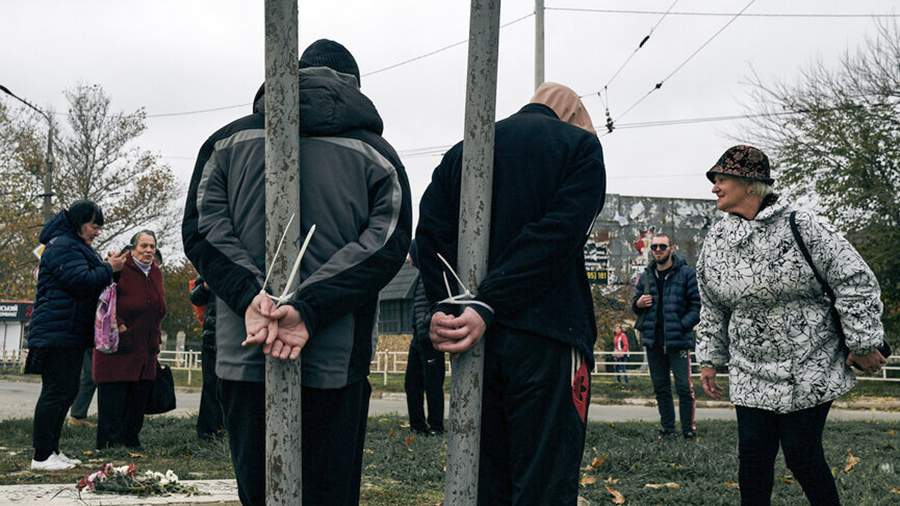 On November 13, the American Associated Press agency published photos of residents of Kherson tied to poles after entering the territory of the Armed Forces of Ukraine (AFU).

The pictures show how the hands of two men tied to poles are tied with plastic clamps. In the background there is a billboard with the inscription: «Into the future — together with Russia.»

According to the agency, they were punished for allegedly cooperating with the Russian authorities, but at the moment there is no exact confirmation of this information.

On the same day, it became known that at least six media representatives, including CNN and Sky News, lost their accreditation for reporting from Kherson. This decision was made by the General Staff of the Armed Forces of Ukraine. According to the ministry, the reason was a gross violation of the rules of work in the area of combat operations. As a result, journalists were denied the right to carry out professional activities, and their press cards were invalidated.

On November 12, a curfew was announced, as well as restrictions on entry into and exit from Kherson. These measures, according to the Ukrainian authorities, are dictated by the need to mine the city.

On Friday, it was reported that the transfer of units of Russian troops to the left bank of the Dnieper was completed in the Kherson direction. The Ministry of Defense of the Russian Federation said that persons who wished to leave the right-bank part of the Kherson region were assisted in moving.

The order for the maneuver was given two days earlier, on November 9, by Russian Defense Minister Sergei Shoigu following a meeting with the commander of the joint group of troops in the area of the special operation, Sergei Surovikin.